Locally Led Advocacy: Opportunities, Challenges and What We’ve Learned Along the Way

The Global Health Advocacy Incubator (GHAI) recently hosted its inaugural Twitter Spaces conversation with an exploration of “locally led advocacy” — what it means, why it’s important, how to do it, and how to do it better. Kate Midden, communications director, spoke with Angela Bruce-Raeburn, the founding principal of DiverseDev and a former regional advocacy director at GHAI. 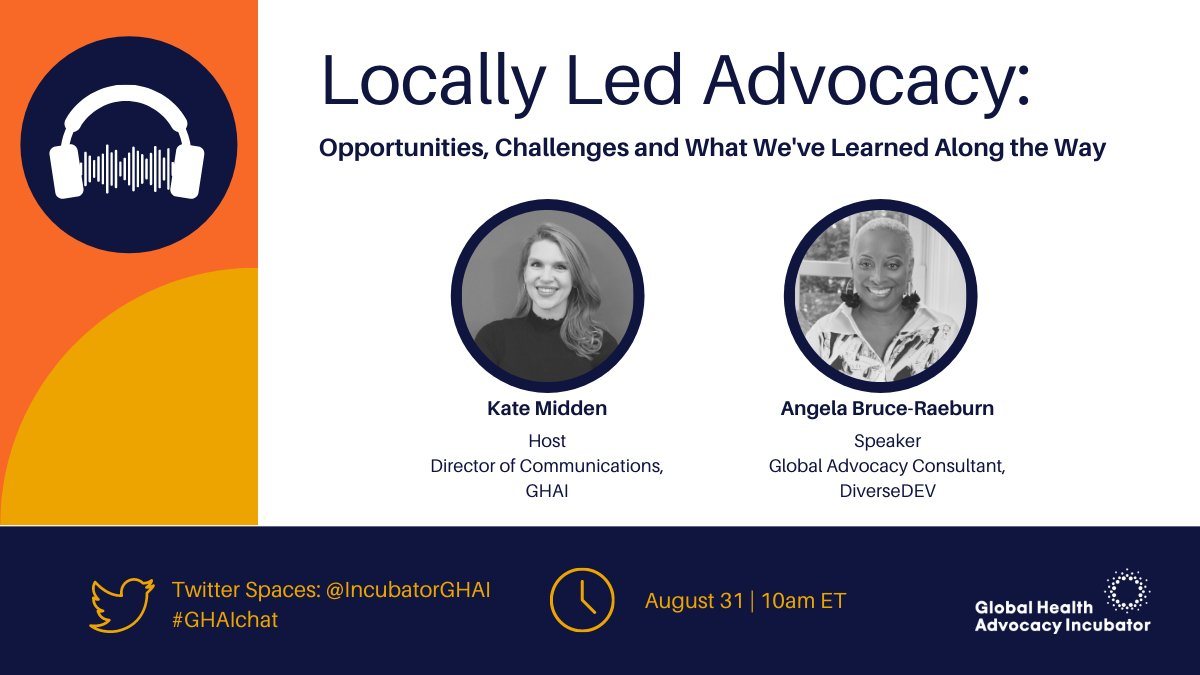 GHAI works with in-country partners around the world to build advocacy campaigns around urgent public health issues. We believe policy change must be locally led and sustained: our role is to enhance the ability of advocates to create the change they envision.

“Our conversation on Twitter Spaces was about how we work,” Kate Midden explained. “For example, although we work all over the world, Angela and I are based in the Washington, DC area. So, when we talk about supporting advocates in the countries where we work, there are already many considerations, not least among them being geographically far from the organizations and people we support – particularly during COVID-19.”

The conversation addressed a number of questions confronting the global health community:

Listen to the full recording and learn more about GHAI’s work:

Kate Midden (@katemidden) is the communications director for GHAI’s road safety program. She leads the team providing strategic communications support to civil society organizations advocating for policies that prevent road crash deaths and injuries. Prior to joining GHAI, Kate oversaw external engagement for Devex’s global news operation, including subscription growth, audience development, news marketing, media partnerships, social media and the organization’s engagement with key global events such as the U.N. General Assembly, World Health Assembly and World Economic Forum. In the past, she has served as a press officer with USAID’s Office of U.S. Foreign Disaster Assistance, led media relations efforts for the Center for Global Development and managed consumer public and crisis communications for Kaiser Permanente. She started her career as a producer with WBEZ Chicago.

Angela Bruce-Raeburn (@AngelaBruceRaeb) is the founding principal of DiverseDev – an organization dedicated to starting conversations about diversity and inclusion while challenging the power imbalance in the development sector. Until recently, she was the regional advocacy director for Africa at the Global Health Advocacy Incubator. Prior to that role, Angela was GHAI’s Associate Director for Advocacy in Asia, leading road safety advocacy in China and the Philippines. Previously, Ms. Bruce-Raeburn worked as the Senior Policy Advisor for the Humanitarian Response in Haiti at Oxfam in the aftermath of the earthquake in 2010. Prior to joining Oxfam, Angela was the President of Junior Achievement of Sacramento Inc.