Advocates Around the World Call for Strong Road Safety Laws 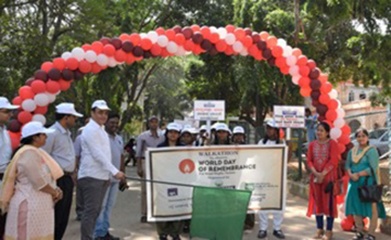 The coalition in India facilitated and placed an op-ed from a key elected official and a prominent orthopedic surgeon offering support for pending legislation to amend the Motor Vehicles Act in the country’s upper house. Civil society organizations also organized events across the country, including in Nagpur, where government officials and prominent medical professionals stood together and signed a petition calling for swift passage of the Motor Vehicles Amendment bill. Following the event, participants traveled together to deliver their petition to the advocacy coalition’s most important government stakeholder, Transport Minister Nitin Gadkari.

Consistent with its legislative objective, the civil society coalition in the Philippines worked to draw attention to the importance of child car seats on World Remembrance Day by hosting multiple events in metro Manila and beyond, including a photo exhibit that launched at the center of social life in the Philippines, a mega mall and cinema, and moved at the end of the month to the Senate and House office buildings to reach legislators and their key staff members. A post announcing the photo exhibit reached 30,000 views, and the launch event drew print and television coverage and earned nearly 6,000 engagements on Facebook.