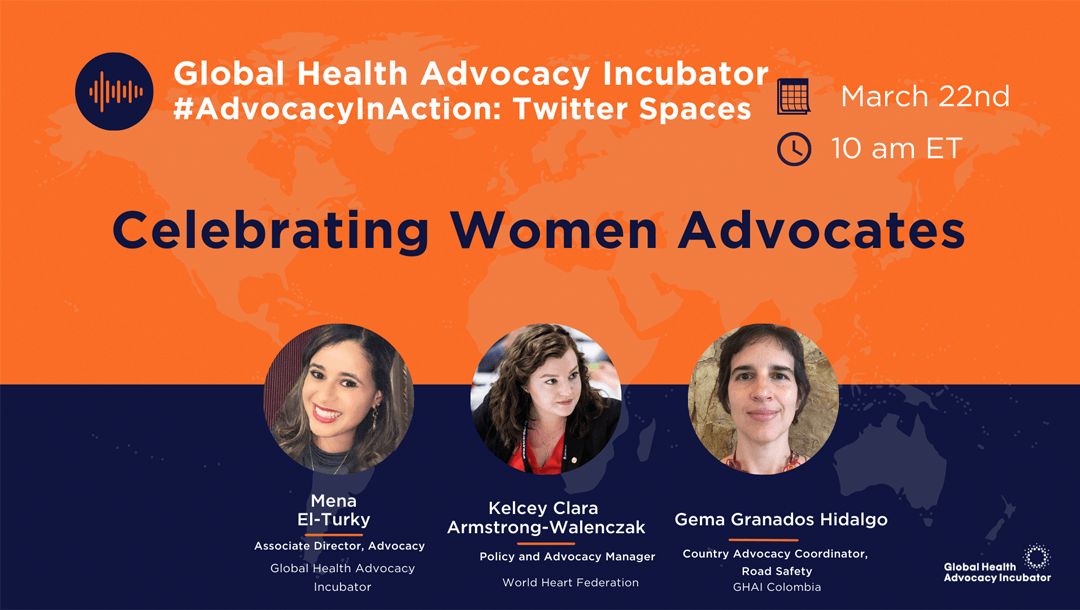 Around the world, women advocates are leading the charge to advance progress towards a wide array of public health issues. From safer roads to global health equity, advocacy campaigns led by women are moving the needle, changing policies and improving the health and wellbeing of entire populations.

In honor of Women’s History Month, the Global Health Advocacy Incubator (GHAI) hosted an episode of our Twitter Spaces Advocacy in Action series: Celebrating Women Advocates, which brought together women activists leading the way in the fight for a healthier world. Hosted by Mena El-Turky led a conversation with panelists Kelcey Armstrong- Walenczek, Policy and Advocacy Manager for the World Heart Federation, and Gema Granados, Country Advocacy Coordinator for GHAI’s Road Safety work in Colombia.

“Institutions like academia and… government are making an effort to… understand how women are affected and are involved in the road safety issue. But there’s a lot left to be explored and understood and done. Both in research and in public policy in general.” – Gema Granados

The importance of conducting research through a gender lens and of having gender-disaggregated data emerged in the conversation as one of several essential components of improving gender disparities in health outcomes. Gender diversity within advocacy and research spaces can support these goals. However, having fewer role models in the field may discourage some women and girls from pursuing advocacy.

A critical part of building more inclusive spaces is encouraging women and girls to not only be involved in advocacy, but to become leaders and role models who can promote advocacy as a viable path for all, regardless of gender. When everyone has a seat at the table, we can make the world a healthier place for all.

Listen to the full recording and learn more about GHAI’s work: