By: Jackie Okao and Roxanne Paisible

Safe roads are an essential part of everyday life in Uganda. Children rely on roads to get to school and their parents and caregivers need reliable, safe roads to be able to contribute to the local economy, commute to work and go to the local markets. Safe roads also ensure that essential medicines and vaccines can be transported safely from warehouse facilities and reach communities who need them the most.

Road crashes unfortunately continue to injure and claim the lives of far too many Ugandans. Every year, more than 3,600 people lose their lives on the country’s roads and over 8,300 people are seriously injured. These crashes particularly impact young people, who constitute the majority of the population in Uganda. Young people are Uganda’s present and future and play a critical role in advancing inclusive development efforts. These deaths and injuries are entirely preventable with the right policies in place.

There is also an added economic burden to road crashes. Road crashes negatively impact already strained government budgets. As a result of road crashes, the Ugandan government loses an estimated UGX 4.4 trillion each year (US $1.2 billion), which could be used towards essential services like health, education and economic development programs.
In Uganda, speed is among the leading causes of road crashes. Global data shows that safer speeds, defined as 30 km/hr where people work, live and play, save lives. Yet, there has historically been little clarity about the policy pathways to legislate safer speeds from the national level.

That has now changed. In February, the Road Safety Advocacy Coalition Uganda (ROSACU) released a comprehensive policy report with the support of the Global Health Advocacy Incubator (GHAI), which outlines the policy pathways for improving speed policies to help ensure that people can reach their full potential and live productive and fulfilling lives.

The report clarifies who has the responsibility to set speed limits. Under the main legislation that governs speed policies, the Roads Act, the Ministry of Works and Transport can prescribe the speed limits and delegate that authority to local governments. However, the government has not fully operationalized this important law and must urgently do so to save countless lives. In addition, the national government must update the 2004 speed regulations to ensure they align with regional and global best practices and standards. 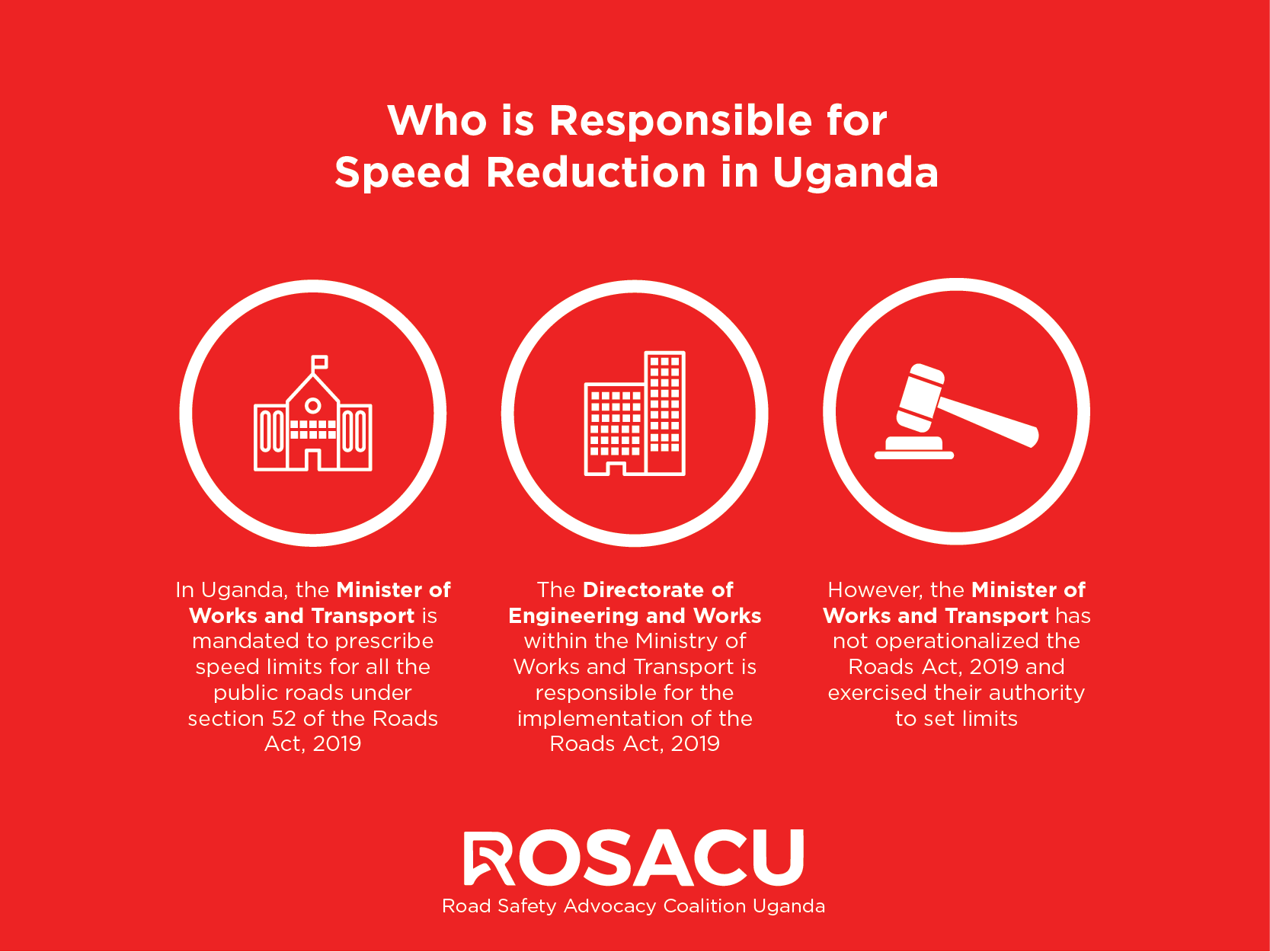 GHAI worked alongside Uganda’s road safety advocates to host two launch events in Kampala and Gulu City in northern Uganda to raise awareness for the need to operationalize the law and update the speed regulations. The events brought together key stakeholders from the Ministry of Works and Transport and other government agencies, the media, civil society, the Ugandan National Police, youth leaders and development partners. The Director for Transport Regulation and Safety made remarks on behalf of the Minister of Works and Transport, where he expressed the Minister’s support for the 30 km/hr speed limit.

Until policies and regulations on speed are addressed, in the interim ROSACU calls on the Minister of Works and Transport to issue a directive to reduce the speed limit to 30 km/hour where people work, live, and play. GHAI will continue to support, advise and celebrate the great work of the various organizations in Uganda’s road safety coalition as we work to save lives on the road.

Advocates, civil society, policymakers and other key partners all have a role to play in ensuring that everyone can travel on the roads free from injury and harm. The issue of over speeding can be easily tackled if these policy recommendations are implemented and enforced. Effective speed policies will contribute to a brighter and more inclusive future for all Ugandans.