Ecuador’s advocates rallied to strengthen a new bill that was just published in Ecuador’s Official Register. Here’s how they did it. 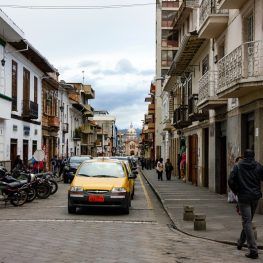 This April, Ecuador took huge strides toward reducing this toll with the passage of a new national Transit Bill. The Bill, introduced last year in Ecuador’s National Assembly, contains key road safety measures, including speed reduction and helmet use—measures demonstrated to reduce injuries and save lives.

This collaboration yielded a set of recommendations based on global best practices for policymakers that would strengthen the legislation to make sure approved and certificated helmet use is adopted, as well as a reduction in speed limits. Fundación CAVAT Nicole Paredes later delivered the joint recommendations to the National Assembly.

Civil society partners identified an opportunity to draw public and media attention to the recommendations in order to maximize the impact of their collective actions. GHAI worked with a strategic communications firm based in Ecuador to provide the organizations with media and spokesperson training, and to co-develop key messages, press releases and media outreach. In the lead-up to the vote in the National Assembly, partners conducted a social media campaign — including live-tweeting an event during Road Safety Week to discuss the recommendations — using the hashtag #LeyDeTransito.

The media attention attracted wide interest from Ecuadorians, including legislators, many of whom became engaged in the conversation on social media by tweeting and retweeting messages about the importance of approving the Transit Law and passing the law to the Official Registry for safer roads.

Passing a law is only the first step. Just as important is ensuring that it can be implemented equitably and effectively. Advocates in Ecuador are already facilitating the development of implementing rules and regulations for the Transit Law and bring even safer roads to the country.