A win for road safety — and society — in Mexico 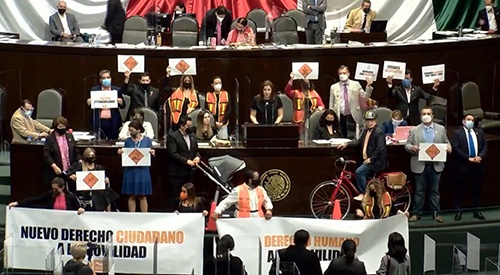 Advocates support the Constitutional Amendment on the Senate floor

Every morning, when each one of us leaves our homes and families, we wish to return safe and sound at the end of the day.

The problem here is that, because of the lack of road safety policies, our streets, regulations, mobility options, vehicles, and infrastructure are not the same everywhere. Instead it depends on which country and which city people live in how safe they are on the roads.

This month, Mexico took an important and historical step in changing the national Constitution to include mobility as a constitutional right to ultimately save lives. This constitutional amendment was possible because of a strong coalition of organizations and individuals. The ultimate purpose of this amendment is to allow the national government to legislate and set policy on road safety issues.

This hard work began 5 years ago, and is based on both strong evidence and in local regulatory experiences, such as the Mobility Law in Mexico City. In Mexico, more than 17,000 people die every year from traffic crashes. According to government agencies, young people and children are the most affected.

Victims organizations, advocates and legislators fought a long battle over the last two federal administrations. Finally, in December 2019, the Mexican Senate voted unanimously to approve the Mobility and Road Safety Amendment. On October 12th, 2020, the House of Representatives followed, voting 351-0 in favor of the amendment. The amendment passed with support of all political parties.

This represents a huge victory for the road safety agenda and the Mexican coalition—and not just because they were able to build a historic legislative process, through strong advocacy tools and citizen empowerment. The victory also happened in a difficult political moment in the country, because elections will come next year.

The next stop will be the local State Congresses, as at least 17 of Mexico’s 32 states need to ratify the amendment before it is officially incorporated into the National Constitution. After that, lawmakers must build consensus and pass a comprehensive national Road Safety and Mobility Bill into law. Fifteen states have already ratified. After the 17-state adoption of the amendment, the National Congress will have 180 days to pass the Road Safety and Mobility bill.

Our streets are a prime place where both federal and local road safety policies can evolve. Stronger regulation and policy will save lives. This is the spirit of Mexico’s road safety work.

Commentary: Pulling Back the Veil on Big Food and Soda Marketing