A Star-Studded Call to Decrease Road Deaths in India 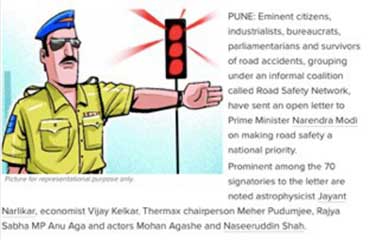 In India, a wide-ranging coalition of civil society organizations are using grants from the Global Road Safety Partnership to advance long overdue amendments to the country’s Motor Vehicles Act. The legislation has not been updated in 30 years, a time period when India has experienced a dramatic transformation across its economy and transport sector. As a result, India has felt the devastating toll of road crash deaths, with 400 Indians dying on the road every single day. The coalition is working feverishly to advocate for a new law to save lives, and the Global Health Advocacy Incubator has been a close partner from the beginning of the campaign.

After years of effort, the coalition helped advance the passage of the Motor Vehicles (Amendment) Act through the lower house of India’s bicameral legislature – a tremendous achievement. Advocacy activities then turned to the upper house, where a vote was needed to advance the legislation.

After partisan squabbles held up action on nearly all bills pending before the upper house, the coalition sought support from the Global Health Advocacy Incubator to develop communications strategies that would draw new attention to the urgent need for action to save lives on the roads. After brainstorming and consulting the political map, the coalition decided to draft an open letter to Prime Minister Modi asking him to urge Parliament to act.

Using their networks and access, the coalition members connected with over 75 well-known and influential individuals from across various sectors of Indian society, obtaining their signatures on the public letter. Signatories represented a broad constituency of voices advocating for passage of the Motor Vehicles (Amendment) Act, including current and former members of Parliament, prominent doctors and economists, business leaders and popular Bollywood actors, among others. The letter earned front-page coverage in major newspapers and broad coverage across the Indian media, bringing attention and fresh momentum to the stalled bill at a critical moment in the legislative process.