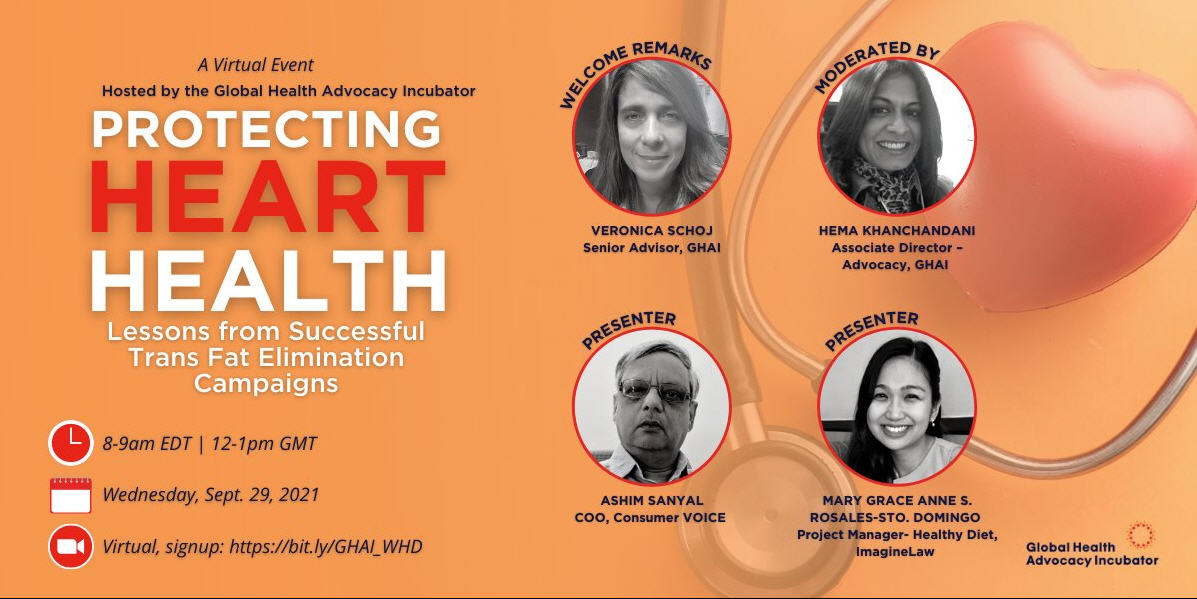 “Cardiovascular disease is preventable, and a key component of prevention is policy promotion for a healthy environment and the regulation of unhealthy products like tobacco products, alcohol, ultra-processed foods and beverages high in sodium, sugar, saturated fat and trans fat,” said GHAI Senior Advisor Verónica Schoj, who moderated the event.

GHAI’s World Heart Day event featured lessons learned from trans fat elimination campaigns in India and the Philippines, and introduced tools developed by GHAI to facilitate trans fat research and advocacy around the world. India approved strict TFA limits in February following strategic advocacy by a coalition of partners support by GHAI. The Philippines adopted a national policy in July calling on the country’s Food and Drug Administration (FDA) to issue and enforce trans fat limits that are in line with recommendations by the World Heart Organization within two years. FDA is expected to release draft regulations within a few months.

“In 2021, in the middle of the COVID-19 pandemic, India and the Philippines approved trans fat measures based on the highest scientific standards,” Schoj said. “These were amazing public health victories, and we congratulate their governments and civil society organizations for their leadership.”

In his remarks, Sanyal outlined India’s path toward trans fat elimination, which has been supported by a coalition of civil society organizations working with the Food Safety and Standards Authority of India to strengthen trans fat regulations and facilitate the replacement of trans fat-rich partially hydrogenated oils (PHOs) with healthier alternatives.

“We have faced a lot of opposition,” Sanyal said, “but I’m glad to say that the scientific documents, the research, the WHO advisories and the help we got from GHAI in terms of global best practices were all brought together in a way that was acceptable to the scientific community and the regulatory body.”

Rosales described how civil society advocates in the Philippines used “powerful stories” and “sensory evidence” to make the case for trans fat elimination, including taste tests, cooking demonstrations and a children’s book by an award-winning author on the link between cardiovascular health and trans fat consumption, which was shared with political decision-makers.

“We know it’s hard to sell something you cannot see,” Rosales said. “We determined our advocacy strategy and designed it in such a way that we can make use of sensory evidence. We paint pictures.”

“Through the PHO market mapping study, we were able to determine that 50% of our PHO as stand-alone oil comes from domestic sources and the other half from imported sources,” Rosales said. “Because of that research, precisely, we decided that the policy should be a hybrid of a PHO ban and a TFA limit because we wanted to guard from internal and external sources of trans fat.”

GHAI recently published guidance for developing PHO market research, including a recommended methodology and key questions to answer. GHAI also published a guide with key considerations for regulating trans fat, including six key questions to help stakeholders choose a type of trans fat measure and tailor it to best fit a country’s legal and food system.

These tools are informed by GHAI’s work around the world. “We take a proven, systematic approach to support locally led advocacy campaigns,” said Hema Khanchandani, an associate director of advocacy at GHAI. The approach is customized by local partners to deliver health policy wins in countries around the world, in diverse political systems, she added.Together with Resolve to Save Lives, GHAI previously released a set of sampling protocols for the rapid assessment of TFA in fats, oils and foods.