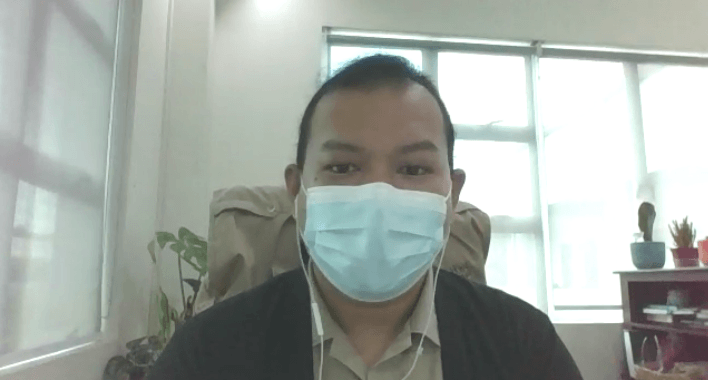 Rodley Desmond Daniel Carza, head of the Policy and Technology Section of the Department of Health’s Health Promotion and Communication Service, discusses a new administrative order on the elimination of industrially produced trans fat at a virtual media session on July 8.

The Philippines has reached an important milestone in its effort to reduce deaths by cardiovascular disease: On July 20, an administrative order went into effect that puts the country on a path to eliminating toxic artificial trans fat from its food supply.

The administrative order, signed June 18 by Secretary of Health Francisco T. Duque III, was developed in consultation with the World Health Organization (WHO) and a civil society coalition led by ImagineLaw with support from the Global Health Advocacy Incubator (GHAI). It sets a national policy for the elimination of industrially produced trans fatty acids in food, calling on the Food and Drug Administration to issue and enforce trans fat limits that are in line with WHO recommendations within two years.

“The Philippines has taken an important step toward eliminating toxic chemical trans fat from its food supply,” said Joshua Abrams, director of Eurasia Programs at the Campaign for Tobacco-Free Kids who leads GHAI’s trans fat elimination work in the Philippines. “We applaud the civil society advocates who have helped to pave the way for a #TransFatFreePhilippines.”

Cardiovascular diseases are the number one cause of death in the Philippines; approximately 5,302 of these deaths were associated with trans fat consumption in 2019.

Over the past two years, government leadership and multi-stakeholder collaboration have helped to frame trans fat elimination as a public health priority. The Department of Health established a Healthy Diet Technical Working Group in July 2019 to lead policy development. With support from GHAI, ImagineLaw launched the Trans Fat Free Philippines campaign to raise public awareness and support for trans fat elimination. The organization created an informational website and, in collaboration with government partners, produced a series of public service announcements that have been shown online and in health facilities across the country. They also engaged influential journalists and media figures, including the award-winning children’s book author Dr. Luis Gatmaitan, who in 2020 published a children’s book on cardiovascular health and trans fat titled “Ang Tatay Kong Mahilig sa Instant.”

The campaign generated momentum for trans fat elimination by inspiring a growing coalition of policy champions within government and beyond.