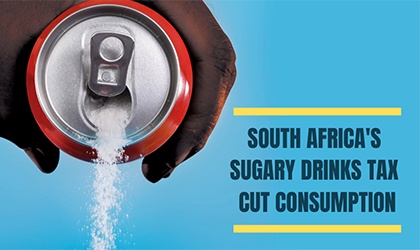 A recently published study in The Lancet Planetary Health demonstrates that South Africa’s Health Promotion Levy (HPL), a sugar-sweetened beverage (SSB) tax, was effective in reducing consumption and purchases of taxed beverages within a year of going into effect. This is the first national study to show that the HPL helped lower consumption of taxed SSBs.

Findings included that the HPL led lower-income households to substantially decrease their purchases of SSBs. These households are most vulnerable to type 2 diabetes and hypertension, health conditions that could be prevented if SSB consumption continues to decrease.

The study found that the reductions in sugar, calories, and volume began after the announcement of the HPL. Even before the HPL was implemented, South Africans changed their purchasing behavior, and reformulating to reduce sugar content began. Decreased purchasing of taxed SSBs and heightened awareness around the harms of these products can help encourage long-term behaviors that can reduce the risk of developing diet related NCDs.

Their report adds to evidence from other geographies, like Mexico, demonstrating the effectiveness of SSB taxes. In addition to South Africa and Mexico, at least 45 countries around the world, like Peru and the United Kingdom, have successfully implemented SSB taxes.

The South African government implemented the HPL in April 2018 – an 11% excise tax on SSBs based on their sugar content – in an attempt to curb increasing obesity rates and diet-related NCDs. Currently, advocates in the country are working towards increasing the existing tax to 20%, as recommended by the WHO. The study demonstrates that beverage taxes based on sugar content can help reduce consumption of SSBs.

To find out more about the evidence supporting HPL and the South African context, read the latest article in The Conversation, authored by Professor Karen Hofman, of the South Africa Medical Research Council and WITS Centre for Health Economics and Decision Science, a Food Policy Program research partner in South Africa.