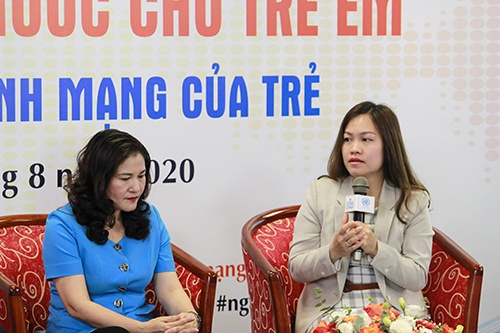 A Vietnamese livestreamed show that raised awareness for a critical drowning prevention program in Vietnam also highlighted the partnerships that made it possible.

Drowning is a silent killer that claims more than 2,000 children’s lives in Vietnam every year. During COVID-19, the number of child drownings increased. With schools closed due to the pandemic, children are spending long hours at home without adult supervision as parents may be away working.

A talk show on August 10, 2020 highlighted a national drowning prevention program that is tackling childhood drowning, a leading cause of death in Vietnam for children and adolescents under 15 years of age. The show is part of a series of communication efforts to raise awareness and build support for the program from national policymakers, local authorities and the public at large. It was hosted in Hanoi by the Global Health Advocacy Incubator (GHAI) in partnership with the World Health Organization (WHO) and in collaboration with Vietnam’s Ministry of Labor, Invalids and Social Affairs (MOLISA).

A proven solution for an urgent problem

The government drowning prevention program saves lives by teaching children survival swimming skills based on a WHO-approved curriculum. During the first phase of the program, which ran from 2018-2019, 8,915 children were trained in survival swim skills with an 80% success rate. In addition, 17,425 children received water safety skills. Simultaneously, over 5,000 parents with children under the age of 6 years received training in identifying risk factors for drowning and ensuring that children are not left without adult supervision (a risk factor for drowning). In comparison with non-intervention locations, provinces running this program saw a reduction in drowning cases, as well as a sharp increase in knowledge among parents with children under the age of 15 about the risks of drowning and preventive measures.

Support for the program has been demonstrated across Vietnam through local co-funding for infrastructure, program management and training. These local investments also contribute to the program’s long-term sustainability.

The first phase of the program covered 21 districts in 8 high burden provinces of Vietnam throughout the country. With support from GHAI and WHO, the government is extending the project to 31 districts in 12 provinces over the coming year (2020-2021).

The program is primarily funded by Bloomberg Philanthropies. MOLISA the lead government agency.

HE Nguyen Thị Ha, Vice Minister of MOLISA, spoke on the show about the program’s important role in curbing childhood drowning in the country. WHO was represented by Dr. Kidong Park, and GHAI by our country director, Doan Thu Huyen.

GHAI is the sustainability partner, helping strengthen ownership and capacity of lead implementors, facilitating a larger network of drowning prevention expertise, communicating the role of the program in meeting Vietnam’s injury prevention targets and supporting a demonstration program that can be scaled and sustained nationally.

The project demonstrates the potential for partnerships between governments and civil society organizations to implement proven techniques tailored to the national needs and context. The long-term strategic planning, part of the program from the beginning, builds on shared values to prepare Vietnam to invest in the program and maintain its achievements into the future.

Commentary: Pulling Back the Veil on Big Food and Soda Marketing