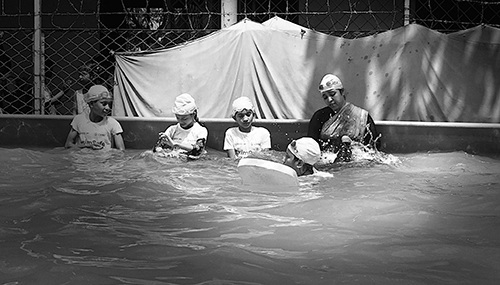 The Global Health Advocacy Incubator (GHAI) is pleased to join a project to support the sustainability of proven drowning interventions in Bangladesh.

Drowning is the leading cause of death for children under five in Bangladesh, killing 40 children every day. In 2003, 25% of deaths among children between the ages of 1 and 4 years were due to drowning. In 2011, that proportion increased to 42%.

To prevent child drowning in Bangladesh, Bloomberg Philanthropies (BP) has been working with Center for Injury Prevention and Research Bangladesh (CIPRB), Synergos and Johns Hopkins University since 2012 under its Drowning Prevention Partnership Project. The project focuses on community day care centers, which have been shown to be an effective intervention to prevent the drowning of children in Bangladesh. The project currently operates 2,565 community day cares in four districts.

With the goal of transferring ownership of these day care centers to the Government of Bangladesh, GHAI has been brought on board to complement the role of local implementing partners by building additional capacity on the ground to understand the budget process, as well as engage government stakeholders about the urgent need for a national program on drowning prevention. Ruhul Quddus, a recently retired government official, will coordinate GHAI efforts in Dhaka.

GHAI believes successful campaigns must be locally led and driven. “Building on our long track record of government and civil society engagement in Bangladesh, GHAI looks forward to raising the profile of drowning prevention in close collaboration with in country partners,” said Vandana Shah, Director of South Asia programs, who will coordinate this effort. To this end, GHAI looks forward to a strong partnership with the Ministry of Women and Children Affairs, as well as CIPRB and Synergos, who have been engaged in designing and implementing this project and building government support.

GHAI has supported the government of Vietnam to implement and sustain drowning prevention interventions since 2018.