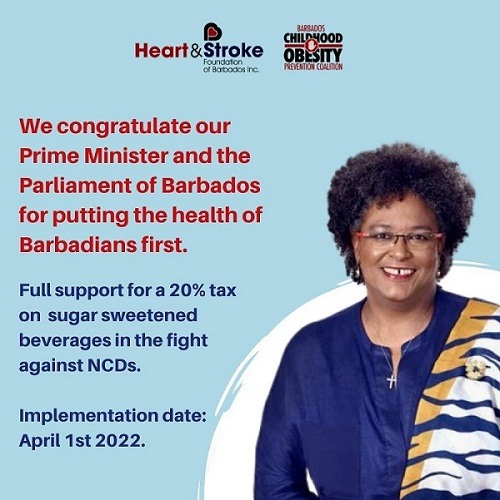 In a victory for local advocates and public health, Barbados has enacted a sugar-sweetened beverage tax that meets World Health Organization (WHO) recommendations.

Because of its high sugar content, drinking sugary drinks is associated with a significant increase in body mass index in children and weight gain in adults. Excessive sugar intake also increases one’s risk of type 2 diabetes, heart disease and some cancers. In 2015, the Barbados government who faced a population with increasing rates of diet-related diseases, such as diabetes, and introduced a 10% tax on sugar-sweetened beverages. While this was an important first step, the tax fell short of global best practices. For example, WHO recommends a 20% tax on sugar-sweetened beverages to effectively curb the consumption of these harmful drinks. According to the Pan American Health Organization, a 20% tax on sugar sweetened beverages was expected to reduce demand for sugary drinks by 24% compared to a 4% reduction for a 10% tax.

An evaluation of the impact of Barbados’s sugar sweetened beverage tax found that weekly sales of SSBs significantly decreased compared to expected trends if a SSB tax weren’t implemented. In addition, public opinion polls found that 78% of Barbadians felt that it was important that government take steps to reduce obesity and the related non-communicable diseases. Armed with this evidence, advocates in Barbados, including the Heart and Stroke Foundation of Barbados, a Global Health Advocacy Incubator Partner, alongside the Barbados Childhood Obesity Prevention Coalition, fought to strengthen the tax through outreach to with government. Their proposal included pushing for a 20% tax and expanding the drinks taxed to include powdered drinks. To create a healthy food environment, they also proposed reducing taxes on healthier items. After allis overweight or obese and non-communicable diseases account for 60% of the Barbadian government’s health expenditure.

On March 14th, when she presented her budget, Prime Minister Mia Amor Mottley announced an increase in the sugar-sweetened beverage tax from 10% to 20%. In addition, despite fierce industry opposition – including a trip to Barbados by external beverage conglomerate representatives to pressure local manufacturers and the government to oppose the tax increase – Prime Minister Mottley put the health of the Barbadian population ahead of private interests and did not waver from its implementation date of April 1st.

As noted by the president of the Healthy Caribbean Coalition, Sir Trevor Hassell, the move by Prime Minister Mottley “Should be an example for other regional leaders.” The Barbados tax increase is an important win in the fight for healthy food policies in the Caribbean.